“It feels good to start off on a high note,” Phillips expressed, as the Las Vegas event was the first 2015 NHRA outing for his team. “Our equipment is second to none; and all of our cars have been flawless. I’ve said, only half-joking for several years that the weak link on this team is behind the wheel. I’m just glad that I was able to hold up my end of the bargain this time around.” 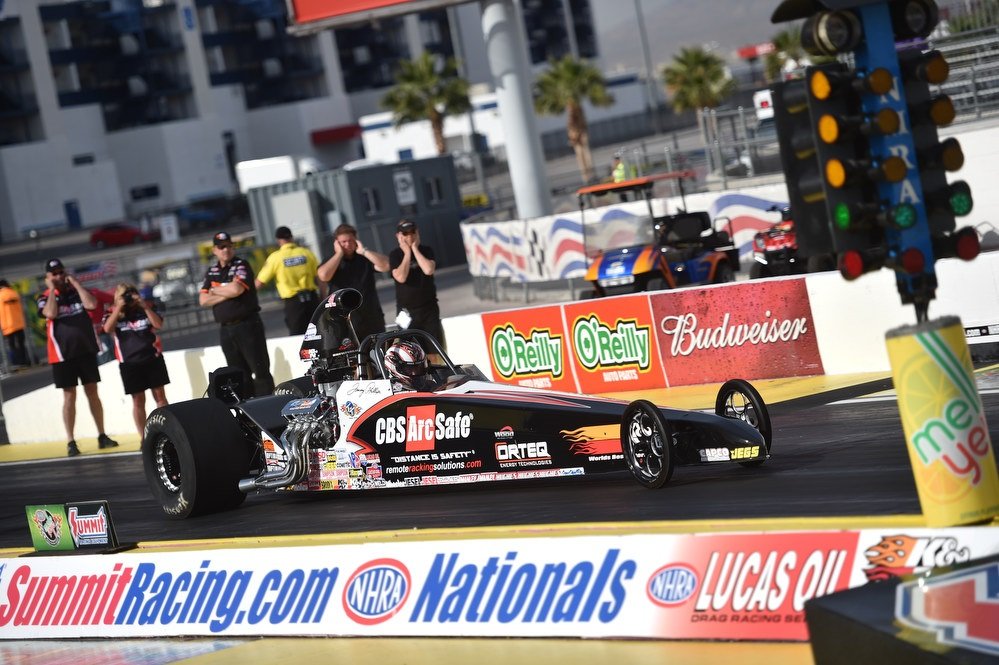 Phillips definitely pulled his weight. In seven elimination rounds, he never trailed on the starting line; taking the reaction time advantage in every round except the quarterfinal, where he and Ryen Lamb left with identical .014 reaction times. His path to victory went through Greg Hicks, recent Division 7 winner Bobby Mirizio, Keith Winters, Neil Markuson, Lamb, Dave Meziere and final round opponent Ryan Cook. Cook, who was appearing in his first ever national event, wheeled his dragster all the way to the final and made a very representative lap with a .018 reaction time and near-perfect 9.058 on the altitude adjusted 9.05 index. But Phillips saved his best run for last, posting a stellar .004 reaction time, and crossing the finish line first with a 9.060 e.t.

“Anytime we get a chance to celebrate victory on the national stage, it’s special,” emphasized Phillips. “But this win was even better than most. Cody and Meghan Ortowski of Orteq Energy Technologies, one of our major team partners were on hand for the event, as were Buddy and Karen Wood. We’re extremely fortunate to be surrounded by fantastic people who support our team. And I just can’t say enough about Jay and Linda Thornburg. Our racing program has become so much more than a weekend job, and they’re with me 100% every step of the way.”

In addition to winning the Super Comp title, Phillips also advanced to the third round of competition in his Super Gas entry. After a long ride home from Nevada, the CBS ArcSafe/K&N Filters/Orteq Energy Technologies/Wood Racing team will be on the track again this weekend, competing at their hometown Lucas Oil Series event at the Texas Motorplex.

“Thanks once more to the Ledbetter family and all of the employees at CBS ArcSafe for allowing us to represent them in the drag racing market,” expressed Phillips. “They are a fantastic company full of excellent people and we are fortunate to be a part of their team. Thanks also to the great people at K&N Filters, Sunset Performance Racing Engines, APD Carbs, Capco Contractors, Hughes Performance, Hoosier Racing Tire, TNT Supercars, Lucas Oil Products, and Sullivan Motorsports. These great people who surround our team allow us to accomplish incredible things.”